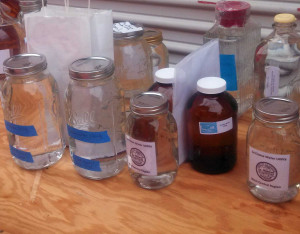 Madison’s Water Utility won a Blue Ribbon for Best-Tasting Water at the Wisconsin State Fair on Monday, the first time the competition was held at the fair. The 27th annual contest was sponsored by the Wisconsin Water Association. Madison can now enter the North American competition and vie for the national title at the American Water Works Association Annual Conference and Expo in Boston in 2014.

At the fair, 17 municipal drinking water utilities provided samples in the non-scientific contest which considered taste, odor, and appearance. Entries were judged in the first round by location in each of five Department of Natural Resources regulatory districts (there were no entries from the DNR’s Northern District). Two Rivers water took second place, Oak Creek placed third, Arcadia fourth and Kenosha rounded out the top five.