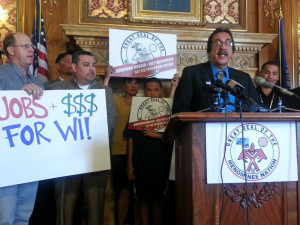 Now that the federal Bureau of Indian Affairs has signed-off on plans for an off-reservation casino in Kenosha, members of the Menominee Indian Tribe are asking Governor Scott Walker to act quickly to approve the project.

Tribal officials, state lawmakers, and union groups gathered at the Capitol Tuesday as a show of support for the proposed $808 million casino, which would be located on the site of the former Dairlyand Greyhound Park. Menominee-Kenosha Gaming Authority Chairman Gary Besaw says the project has the potential to create thousands of jobs and generate millions of dollars for Wisconsin’s economy for decades to come.

Governor Scott Walker has said that any new casino must have “no new net gaming, community support, and consensus among the 11 sovereign nations.”

That consensus is proving difficult to reach though, with the Forest County Potawatomi voicing opposition to the proposal. The Potawatomi, which operate their own casino in nearby Milwaukee, argue the casino would be located within their ceded territory. Tribal officials also say revenue projections for the Kenosha project are overestimated.

Menominee Tribal Chairman Craig Corn says they are willing to work out an agreement with the Potawatomi. “We’re prepared to sit down with them tomorrow if need be, tonight if need be, to discuss exactly what it is that they can’t get past.”

Besaw is calling on Governor Walker to look beyond the dispute and consider the overall positive impact the project will have for the state. He says “when you look at that, it’s a no brainer…it has to go forward.”

Walker told reporters in Milwaukee Tuesday that he has no interest in playing “King Solomon,” and that he hopes the tribes can reach an agreement.