You are here: Home / Packers / Packers Intrasquad Scrimmage is tonight 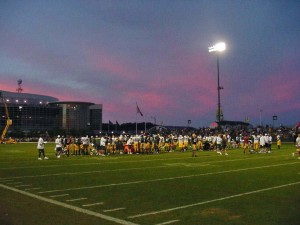 The team held its first and only night-time practice last night (pictured).

Running back – The Packers could keep 4 tailbacks when they break camp.  Draft picks Eddie Lacy and Johnathan Franklin are locks to make the team.  Alex Green, who became the first back to fumble in last night’s workout, is competing for the final spot(s) with DuJuan Harris and James Starks.  Harris has yet to practice with a bad knee.

Linebacker – Undrafted rookie Andy Mulumba has looked good during OTA’s and has continued his eye-opening play during the early stages of training camp.  The Packers have kept 1 or more undrafted rookies in each of the last couple of seasons and Mulumba could join the group this season.

Defensive back – With Tramon Williams sidelined by knee soreness, Davon House took some reps opposite Sam Shields with the Number 1 defense.  Micah Hyde has also been getting plenty of opportunity and has been an early surprise.

Quarterback – The backup job is up for grabs with B.J. Coleman and Graham Harrell splitting reps equally in practice.  Harrell has the upper hand if you count his 4-years of experience in the system, but he performed poorly in last years preseason games.  He’ll need to play much better this time around to hold off Coleman.

Wide Receiver – We know that Jordy Nelson, James Jones and Randall Cobb are the top three receivers going into the season.  The question is, who is next?  The early favorites are Jeremy Ross, who is also expected to take some return duties away from Cobb, as well as Jarrett Boykin.  Rookies Charles Johnson, Tyrone Walker and Myles White have started well in training camp, but one or more is likely a strong candidate for the practice squad, unless somebody in front of them should sustain an injury.

Defensive Line – Keep an eye on first round pick Datone Jones.  He’s had an excellent start in training camp and appears to be a great addition to the group.  Second year lineman Mike Daniels has also had a good camp so far.  It’ll also be interesting to see if Johnny Jolly is in good enough shape to help the Packers by the time the regular season rolls around.

Kicker – The battle is between veteran Mason Crosby and rookie Giorgio Tavecchio.  They’re competing every other day in training camp, both on field goals and kickoffs.  Crosby had his worst season as a pro last season but the Packers decided to stick with him.  With tonight’s scrimmage and preseason games approaching, Crosby needs to start fast to take any doubt away.

Others – Marshall Newhouse has the upper hand at the moment for the right tackle job, but Don Barclay remains in the mix with several opportunities remaining.  Barclay is also getting reps at center as well.  At safety, Jerron McMillian has the upper hand at the moment.  He’s battling M.D. Jennings for the starting job.  Don’t forget the tight end position.  Jermichael Finley is the easy starter here, but the backup jobs are up for grabs.  Veteran Andrew Quarless missed all of last season and probably possesses the best all-around skills of the remaining players.  But he will not scrimmage tonight and is expected to miss a couple of days with a quad injury.  Finally, the Packers would like to remove Randall Cobb from return duties but Mike McCarthy warned everyone during OTA’s that somebody has to step forward.  Jeremy Ross and rookie Johnathan Franklin are two of the top candidates.