You are here: Home / News / Protesters arrested in confrontation with Capitol Police 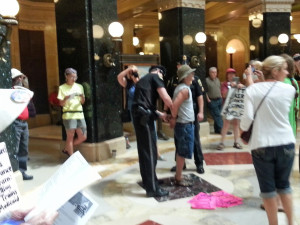 The Wisconsin state Capitol rotunda was once again filled Monday with dozens of people participating in the Solidarity Singalong. Just a few minutes after the noon gathering started, in what has become an almost daily ritual, protesters were warned that it was an unpermitted event and arrests would be made. Capitol Police officers took to the floor shortly afterward, handcuffing and escorting a few participants from the area.

Police have issued nearly 300 citations to protesters since the latest crackdown began on July 24th, following a federal court ruling that said the state could require a permit for gatherings in the Capitol of more than 20 people. Protesters maintain that the permit requirement violates their First Amendment rights.

While protesters have typically been arrested without incident, Monday’s event turned tense when officers wrestled one man to the ground, quickly handcuffing him and carrying him out of the rotunda. Another man was subdued by officers a short time later in a similar manner, as the singing briefly stopped and chants of “shame” filled the rotunda.

Police say the two men both refused to leave the area when ordered to and actively resisted officers. Both are facing charges of resisting/obstructing police, while one is also facing a felony battery charge. A spokeswoman for the state Department of Administration says an officer was injured during the arrest.

Police issued 13 other citations Monday for “participating in an unlawful assembly,” and one for disorderly conduct.