You are here: Home / Sports / Sanders gets big deal with the Bucks 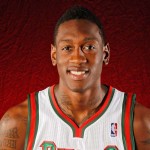 Milwaukee Bucks are working on a four-year contract extension worth $44-million.  The report says all four years would be guaranteed in the deal, which would run through the 2017-18 season.

Sanders is entering the final year of his rookie-scale contract this season and is scheduled to earn $3-million.

Sanders took over as the Bucks starting center last season and finished the year second in the NBA in blocked shots (2.8 per game).  Sanders averaged 9.8 points, 9.5 rebounds and shot 50% from the field, all career highs.

The Bucks selected Sanders 15th overall in 2010 out of Virginia Commonwealth.