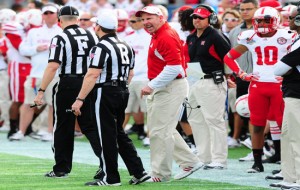 It was one of the biggest home games in Badger history. On October 1, 2011, Wisconsin welcomed the Nebraska Cornhuskers for their Big Ten debut.  The no. 7 ranked Badgers and no. 8 ranked Cornhuskers each came into the game with a 4 and 0 record.  It was their sixth meeting, but first since 1974.  Nebraska fans wore black to differentiate themselves among the crowd of 81,384 at Camp Randall Stadium.

After a first quarter lead by the Cornhuskers, the Badgers responded quickly in the second with a drive by quarterback Russell Wilson to send Montee Ball in for his second touchdown of the game. Wilson then threw for a 36 yard touchdown to wide receiver Jared Abbrederis and then another, a 46 yard strike to Nick Toon.  The Badgers held a 27 to 14 lead at halftime.

An interception to open the third quarter showed the Badgers had no intention of backing down.  With three more touchdowns the Badgers easily defeated the Cornhuskers 48 to 17.  Wisconsin put up 486 total yards of offense.  The win prompted Nebraska coach Bo Pelini to apologize to Cornhusker fans saying, “Defensively they didn’t make plays.”

With the win, the Badgers remained undefeated and jumped to no. 4 in the polls.  The game  solidified standout Russell Wilson as a Heisman contender. It also kept running back Montee Ball’s streak alive, with Ball scoring touchdowns in 11 consecutive games.