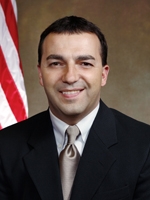 The majority leader in the state Assembly has announced plans to retire from the Legislature.

In a statement released Wednesday, state Representative Scott Suder (R-Abbotsford) said he will step down September 3, 2013 to pursue an opportunity in Governor Walker’s Administration. The Abbotsford Republican has represented Wisconsin’s 69th Assembly District since 1998.

Suder says “I am proud of the work that has been done fighting on the behalf of my constituents and ensuring that they kept more of their hard-earned dollars, had stronger protections against predators to create a safer environment for their children, received access to resources ensuring that their small businesses could grow, and that their voices were not ignored by state agencies.”

Assembly Speaker Robin Vos (R-Rochester) offered praise for Suder’s long career in the Legislature and as majority leader for the Republican caucus. In a statement, Vos said Suder “has contributed greatly to our state and his leadership and dedication has made a difference in the lives of people across Wisconsin.”

Suder’s departure means Assembly Republicans will have to select a new majority leader before the start of the fall session. State Representatives Bill Kramer (R-Waukesha) and Dean Knudson (R-Hudson) are both considering a run for the position. Suder says he will not be endorsing any candidates in the leadership race or in the primary for any special election that’s called for his seat.