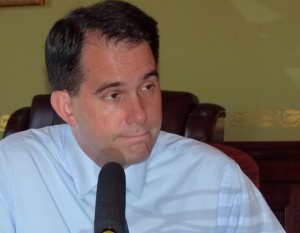 Twenty people are arrested in the Wisconsin Capitol Monday for protesting without a permit, and the crackdown by the Walker Administration will continue as long as people continue to break the rules.

On July 24 Walker’s Administration renewed its effort to crack down on those not holding a permit, issuing nearly 150 citations in the past two weeks. A federal judge last month upheld most of the permitting process.

Wisconsin is getting attention in other states, with some headlines declaring anyone who sings in Wisconsin will be arrested. “Well, I would say it’s overblown.” Walker says it’s not a matter of free speech, otherwise the rules wouldn’t have been upheld in court.

Walker says, considering the relentless demonstrations, it’s appropriate to make sure people are safe and the building is available to all visitors. He believes most people think it’s reasonable to follow the rules of the statehouse. “Unfortunately, there’s a very small group of people in this state who think the rules don’t apply to them and they want us to treat them differently.” He says, “Most people — whether liberal or conservative, Republican or Democrat — think that it’s reasonable to ask people to follow the rules and, in this case, they are very simple rules.”

But how much longer can this go on?

Walker says as-a-matter-of-factly, “as long as people break the rules.”

The regulars in the rotunda maintain they don’t need a permit to express their freedom to speak.