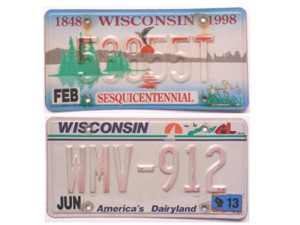 Examples of the faded plates the state wants to replace (Photo: WisDOT)

A pair of license plates commonly seen on vehicles traveling along Wisconsin’s roads will soon begin to disappear. State transportation officials say they are starting the process of retiring the Sesquicentennial license plates and standard auto plates with red lettering, with the goal of having them all off of the roads by September of 2014.

The Sesquicentennial plates were issued from 1996-1998, while the red-letter plates precede the current standard issue plate with black lettering. State Bureau of Vehicle Services director Mitch Warren says many of the plates have lost their reflective coating and the paint on the numbers and letters is wearing off as well. That makes it difficult for police to read the plates, which Warren says could pose a safety risk.