You are here: Home / Environment / Conservation / A new approach to dealing with EAB 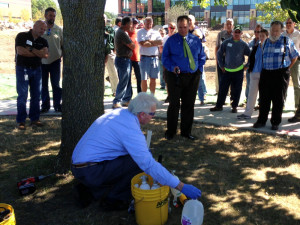 Many cities in Wisconsin are taking a preventative approach to fighting the emerald ash borer.

An infestation of the tree killing insect is pretty much a death sentence for an ash tree. Arborist Jeff Palmer says that can be expensive for communities with hundreds, or even thousands of ash trees to take care of. Local governments can spend up to $800 to remove and replace each tree killed off by the pest. “Literally, within three to four years, every ash tree in a community can die. That’s a hard thing for a municipality to deal with.”

Palmer works for Arborjet, a company that makes a product called TREE-Age, which is an injection that protects an ash tree from the insect for up to two years. A treatment can cost a municipality about $75 per tree, which Palmer says can be much more cost effective when facing the possibility of removing thousands of trees instead.

Milwaukee alone is treating 27,000 ash trees, with several other communities in the state also using the product. Palmer says “EAB is going to cost them money, whether they treat their trees or whether they remove and replace their trees.” He says the smart approach is to delay that process as long as you can.

The emerald ash borer has been found in 18 Wisconsin counties so far.