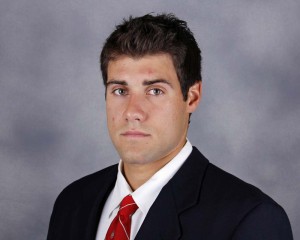 The Badgers won 22 games last season and advanced to the NCAA tournament, finishing up its time as a member of the WCHA by capturing the 2013 WCHA Final Five.  The Badgers return nine seniors and six juniors, the most upperclassmen on their roster since the 2009-10 squad that reached the 2010 NCAA Championship game.  The Badgers also return 81.3% of their goal scoring (91 of 112 goals) and 78.9% of their points (239 of 303 points) for the 2013-14 campaign.

Minnesota was voted to finish second this season, with Michigan picked for third, Michigan State and Ohio State projected to tie for fourth and Penn State rounds out the poll.

Mersch enters the season as the nation’s second-leading returning goal scorer, while Zengerle’s 118 career points has him six points from becoming the highest scoring player in the Mike Eaves’ coaching era.  McCabe was a third-team All-WCHA defenseman a year ago and Kerdiles ranked second in the nation last season among rookie scorers and capped his season with a 12-game point-scoring streak and the WCHA Final Five MVP award.

Wisconsin opens its season on Friday, Oct. 11, at the Kohl Center against Northern Michigan.  They start practicing on Saturday, Oct. 5 in Eau Claire.