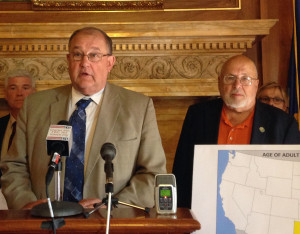 “There’s no provision, and no way a 17-year-old can be waived back to juvenile court,” said Jim Moeser with the Wisconsin Council on Children and Families. President of the State Bar of Wisconsin, and former Dane County Circuit Court judge, Patrick Fiedler supports the measure. “It’s proposing that first time non-violent 17-year-olds are in juvenile court,” he said. “If they’ve got a previous juvenile delinquency adjudication, they start of in adult court. If they are accused of a violent offense, they stay in adult court.”

Wisconsin is currently one of eleven states that treat all 17-year-old as adults in the court system. The bi-partisan bill is from state Representatives Gary Bies (R-Sister Bay), a former law enforcement officer, and Fred Kessler (D-Milwaukee), a former judge.

“Kids are not as mature as we wish they would be,” said Kessler. “They don’t exercise the good judgment that they acquire as they mature, and therefore I think it’s very important that we treat them as juveniles.”

Attorney General J.B. Van Hollen is not supportive of the legislation. Department of Justice spokeswoman Dana Brueck said courts often have sentencing discretion, DAs have charging discretion, and there are often diversion programs for non-violent offenders. An offender’s age can be, and generally is, considered in these contexts. We’re not aware of any issues that suggest that discretion is not being appropriately exercised.

Brueck said DOJ continues to believe that there is no need to change current laws and we also know that there have been serious crimes committed by those under 18 where adult court is the only proper forum.

“My own experience tells me that 17-year-olds should be tried in juvenile court, because they are less likely to re-offend then if they are sent to adult court,” said Fiedler. He said that was backed up by a study from the Legislative Audit Bureau.