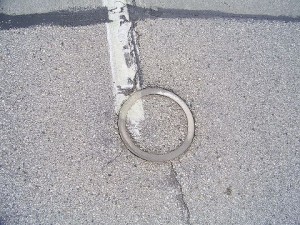 The spot where remains of Sputnik landed. (File photo)

It’s been called one of the top five “funkiest festivals” in the country by Readers Digest. Manitowoc’s 6th annual “Sputnik-fest” commemorates the 51st anniversary of a piece of a Russian satellite falling to earth there.

In 1962, the Sputnik 4 satellite fell out of orbit and back to earth, breaking up in the skies above Wisconsin. The largest piece of the debris landed in Manitowoc, with a chunk creating a smoking crater in front of the city’s Rahr-West Art Museum.

Museum director Greg Vadney says they decided to have fun with the incident, launching the festival six years ago with space-themed food, live music, costume contests, and a Ms. Space Debris pageant. The festival on Saturday will also include a reenactment of the satellite’s crash landing.