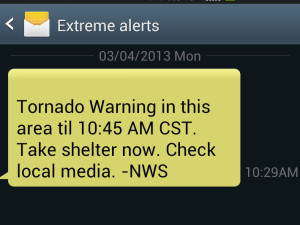 An example of an emergency cell phone alert (Photo: WRN)

In the aftermath of the Boston Marathon bombing, many people were having a hard time getting cell phone calls to go out. Text messages, on the other hand, were able to flow through the jammed network more easily.

Tod Pritchard with Wisconsin Emergency Management says that’s something the public should keep in mind if they need to get in contact with family and friends if a disaster strikes in the Badger State. Unlike voice services, Pritchard says text messages require less bandwidth and can remain in the system until a connection becomes available.

Pritchard says text messaging is just one of many ways cell phones are being looked at as a tool for disaster readiness. Another is the use of smart phones to send out emergency alerts to people. The system is one that’s already been used in Wisconsin a few times, to help warn residents of impending winter storms and other severe weather in a localized area.

Most new models of smart phones already have a free app installed that allows them to receive those alerts. If you are unsure if one is present on your phone, Pritchard says you should look for an icon, which typically looks like a little triangle with an exclamation point inside.

While the information those apps provide can be limited, Pritchard says they help alert people of dangerous conditions and push them to pay attention to other local outlets.