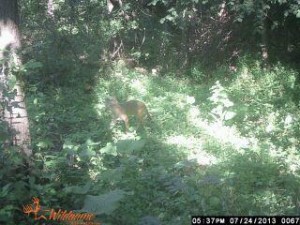 Despite some reports of alleged sightings, a wildlife biologist with the DNR’s Polymath Service Center says it’s pretty unlikely that a cougar is in the Eden area of Fond du Lac County. Dan Weidert says he was first contacted by a man on August 19th who said he saw a cougar cross his driveway and in his pasture. He gave Weidert the name of another man who had a trail camera photo from July.

Weidert says the photo is hard to judge, but based on other things in it including vegetation it’s too small to be a cougar.Weidert says he couldn’t find any tracks and there were no reports of livestock loss. The DNR does have a website with information on reporting large mammal observations including cougars. Weidert says if it is a cougar there’s not much to worry about because cougar or mountain lion attacks on humans are rare.