You are here: Home / Education / Evers says state should ‘stay the course’ on Common Core 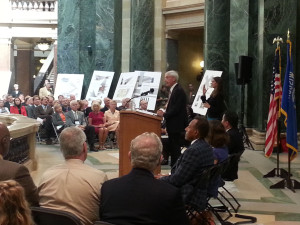 State Superintendent of Public Instruction Tony Evers says Wisconsin should stay the course and put kids over politics when it comes to Common Core standards for education.

Republican lawmakers have scheduled a hearing for next week on Wisconsin’s use of Common Core, national standards for math and language arts performance that have been widely adopted across the country. Governor Scott Walker this week also stated that he would be open to adopting more rigorous standards for the state to follow. However, Evers says educators have been working hard to implement Common Core standards since they were adopted in 2010, and there’s no good reason to abandon them now.

Following his State of Education Address Thursday at the Capitol, Evers told reporters “We’re on the right path now. I think deviating from that path is going to cause confusion and going to cost time and effort around all of the other initiatives that are connected with Common Core.” Those other initiatives include new school report cards the state rolled out last year and an educator evaluation system.

Evers says opponents of Common Core are reacting to conspiracy theories about how test scores will be used or the assumption that they will require teachers to focus only on test scores. He called those views “flat out baloney,” arguing that “just because we are adopting rigorous standards does not automatically mean we’re going to over-test or use test results in an inappropriate way.”

Evers says the state can’t go back to a time when education standards where a “mile wide and an inch deep.”