The newest franchise in the Northwoods League, Kenosha, has named Jake McGhee the 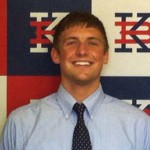 McGhee spent the last three years with the Madison Mallards of the Northwoods League, advancing through the organization.

McGhee is a 2010 graduate of the University of Wisconsin-Madison where he earned his bachelor degree in Finance and Spanish.  He is originally from Hartland, Wisconsin.