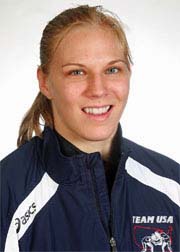 Lampe won bronze after pinning Melanie LeSaffre of France in 46-seconds in the women’s freestyle event at 105.5 pounds.

Lampe made Wisconsin wrestling history by becoming the first girl to place at the WIAA State Tournament.  She finished second at 103-pounds in Division 2 back in 2006.

Lampe then spent three years at Northern Michigan University before moving to Colorado Springs, Colorado to train at the Olympic Training Center.