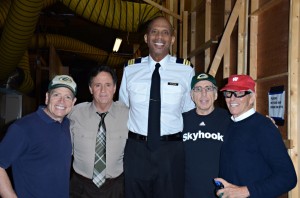 “That is Kareem Abdul-Jabbar and Robert Hays with, of course, the three producer/ director/ writers who hail originally from Shorewood, Wisconsin — David Zucker, Jerry Zucker, and Jim Abrahams.” Klett says, “You know, this really makes pop culture history today, by reuniting this team.” (Surely you can insert your own jokes here.) 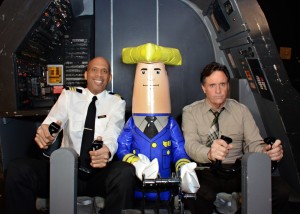 In the original cockpit from the 1980 movie Airplane (Getty Images)

Robert Hays and Kareem Abdul-Jabbar are working together for the first time in over 30 years. A small part of the ad is being filmed in Hollywood in the original cockpit from the iconic movie, but Klett says Wisconsin is definitely the star of the commercials promoting summer, fall and winter of 2014. Much of the filming has already been done right here in Wisconsin.

AUDIO 1:02 Klett says meeting the 7′ 2″ Kareem Abdul-Jabbar was “insane.” She also talks about antics behind the scenes.

The ads will be debuted in March at the 2014 Governor’s Conference on Tourism in Lake Geneva. Those spots will run in eight midwestern states.

Abdul-Jabbar is the NBA’s all-time leading scorer and helped the Milwaukee Bucks win its only world championship in 1971. He was named the Finals MVP that year. While he holds numerous basketball records, his “Airplane!” character of “Roger Murdock” still greets him by fans at appearances throughout the world.