You are here: Home / Packers / Nothing much has changed with Packers ground attack 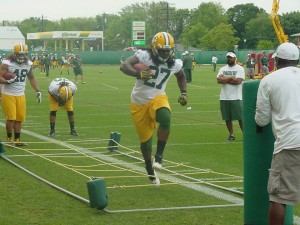 season, but it’s pretty clear that they’re not good enough to run through the San Francisco 49ers defense.

The 49ers knocked off the Packers 34-28, winning their 3rd-in-a-row over Green Bay dating back to last season.

Green Bay’s prized rookie running back Eddie Lacy was held to 41 yards on 14 carries.  Lacy did manage to score his first professional touchdown, but he also fumbled in the first half which saw Mike McCarthy send him to the bench (dog house) for the remainder of the half.

The lack of yardage on the ground certainly wasn’t Lacy’s fault.  The offensive line struggled to open holes for Cedric Benson in the opening game last season (9 carries for 18 yards) as well.

The 49ers finished 4th in the league against the run last season and they would appear to be headed for another top five finish this season.

Because the Packers couldn’t run the ball, they couldn’t control the time of possession.  The 49ers maintained control of the football for 38:35 while the Packers held the ball for just 21:25.

The top rushes in the first half, Lacy for 10 yards, James Starks for 6 yards and John Kuhn for 5 yards.  However, they were all called back because of penalties.

It doesn’t take a rocket scientist to figure it out.  The Packers didn’t make any headway against the 49ers on the ground and one can’t be too optimistic that they would do much better if the two teams meet again in the playoffs.