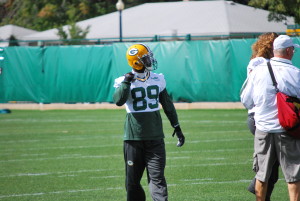 Jordy Nelson and Randall Cobb could all surpass 1,000 receiving yards.

Jones actually made the prediction during OTA’s and Rodgers said it’s attainable.

The three top receivers also have tight end Jermichael Finley to compete with, but it would appear there’s plenty of opportunities to go around.

Washington Redskins safety Brandon Meriweather was fined $42,000 by the NFL for his helmet-to-helmet hit that knocked Lacy out of Sunday’s game.  Meriweather said that he planned to appeal.

For the eighth time in his career, Packers quarterback Aaron Rodgers was named NFC offensive player of the week, after passing for a franchise record tying 480 passing yards in the win over the Redskins.