You are here: Home / Packers / Packers trying to get tough 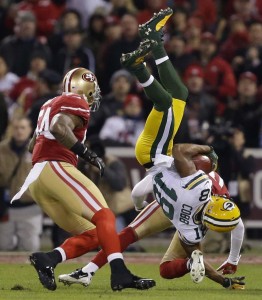 teams quarterback well after he’s out-of-bounds.  It isn’t pushing and shoving at the end of every play.

Being told the team lacked toughness for the past year or more has clearly gotten under their skin.  But they still have more to do, to shed the image.

Toughness in the NFL is smashing somebody in the mouth before the whistle blows and preferably on the way to making a play.  It’s the offensive and defensive lines winning the battle at the point of attack, pushing their respective opponents backwards.

Part of the definition can also include defensive backs actually wrapping up and making a tackle.  Those defensive backs should take a lesson from punter Tim Masthay who showed text-book tackle form against the 49ers on a kick during yesterday’s 34-28 loss at Candle Stick.

I did see a boost in intensity yesterday, it was pretty apparent.  But that intensity has to be channeled into making plays.  Because in the end, the San Francisco 49ers were still the more physical team.

I don’t think one could conclude that the Packers lack toughness after what I saw yesterday, but saying your tough has to be followed by making tough plays.

The season certainly isn’t lost after one game.  The Packers would have beaten most teams in the league yesterday.  But they weren’t good enough to beat the 49ers.  The 49ers are the true measuring stick of toughness.  They drew the line in the sand and the Packers still have work to do if they want to get close to crossing it.