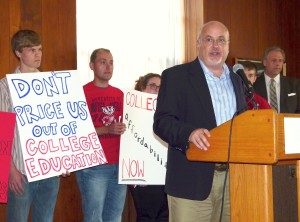 U.S. Representative Mark Pocan (D-Wisconsin), visits the University of Wisconsin Memorial Union in Madison (Thursday) to talk about college affordability. “We know that Wisconsin students and people across the country are facing the average debt of $26,000 when they leave college. And we know that student debt has now topped the $1 trillion mark.” He emphasizes, “That’s trillion with a T-R, not a billion or a million, but trillion.”

Pocan wants to ease the burden of college costs by allowing graduates to refinance their student loans to the lowest interest rates available, thereby freeing up more money to spend on necessities and help grow the economy.

Student loan debt is the country’s second highest consumer debt, right behind home mortgages — surpassing credit card debt. Pocan stresses, there’s no extra money for cars, homes, and other purchases that help stimulate the economy. He believes in the aphorism “a rising tide lifts all boats,” and explains, students should have the same privileges as those with mortgages.

The freshman Congressman introduced the measure at his alma mater, UW-Madison. “What this bill that we’re introducing allows you to do, is to refinance your student loan just like you would your house or a car loan so that you’re paying the lowest possible rate for those respective loans.”

U.S. Senator Ron Johnson (R-Wisconsin) agrees student loan debt is suffocating. He had said everyone should get a college education, but that’s not always possible. He said we should be encouraging parents to inform their kids of their full range of options. Young adults shouldn’t be pushed into getting an expensive four-year college degree that can bury a graduate in student loan debt for years into the future.

Instead of a pathway to middle class, Scot Ross, Executive Director of the Institute for One Wisconsin, says student loan debt is a multi-decade debt sentence. “Because what we are talking about is a national economic crisis.”

AUDIO :25 Ross talks about the results of his group’s analysis of a detailed survey of nearly 2,700 Wisconsin residents across income and age levels. The study found it will take Wisconsinites, on average, almost 19 years to pay off their student loan debt from a four-year university. Ross says what they learned about the economic impact of student loan debt on the Wisconsin economy was frightening.

Congressman Mark Pocan’s bill, H.R. 3047, would allow anyone with a federal student loan to refinance so they can pay the lowest interest rate available. The measure has been referred to the House Committee on Education and the Workforce.