You are here: Home / Packers / Rodgers day started with pain in the neck 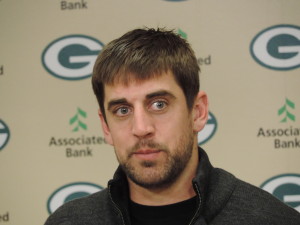 480 yards and four touchdowns in the Green Bay Packers 38-20 win over the Washington Redskins at Lambeau Field on Sunday.

The most amazing thing about Rodgers performance is that it came with a sore neck.  Rodgers said he slept wrong at the hotel the night before the game and had to receive some treatment on his neck when he arrived at Lambeau Field on Sunday morning.

You would never have known he wasn’t feeling well based on his production throughout the game.

Having a running game made Rodgers even more difficult to stop and the offense far less predictable.

The question other teams around the league are contemplating, if Rodgers can do this when he has a sore neck that required treatment, what is he capable of when he has no health issues?