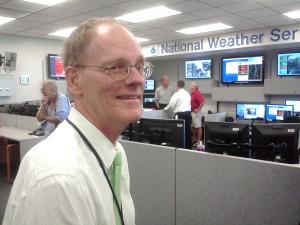 A familiar voice delivering us weather-related information is calling it quits.

After 40 years in the business — over 36 at the National Weather Service — Rusty Kapela is retiring. “It’s been a great ride. It’s been a great career. I’m happy I did what I did and I was able to help a lot of people along the way.”

Kapela, warning coordination meteorologist at NWS in Sullivan, had some exciting adventures over the years. Before joining the National Weather Service in 1977, he lived and worked in Antarctica for three months — the geographic South Pole, where he arrived to find the temperature at minus 50.

Over the years, Kapela remembers winter storms in the Milwaukee area, experienced “incredible blizzards and harsh winds” in South Dakota, and spent a few years in Cleveland, Ohio before returning to the Badger State. “I came back to Wisconsin in ’94 and right after that, 1995, was the big heat wave when Wisconsin lost 154 people.” He says most people don’t realize that excessive heat causes more deaths than any other weather-related event. Already this summer we have 12 heat-related deaths.

AUDIO :23 Kapela notes, in terms of natural disasters, southern Wisconsin is the safest place in the United States to live.

Tod Pritchard with Wisconsin Emergency Management calls Kapela a “Wisconsin Treasure.” Not only does the man deliver timely weather warnings, but he trains weather spotters across the state. “He’s one of the most dedicated professionals I’ve ever met. We’re really losing a tremendous asset. I wish Rusty the best in his retirement … well-deserved. He has been with the Weather Service over 36 years. … He just lived and breathed and ate this stuff! That takes dedication. We’re not gonna see the likes of Rusty for a long time.”

Kapela won’t be able to stay away completely. He says he’s excited about retiring, but he’ll work part time doing something, somewhere.

Other weather highlights during his career include an F-5 tornado in Oakfield in 1996, the Stoughton tornado on August 18 of 2005 (Wisconsin had 27 tornadoes that day), the Groundhog Day blizzard in 2011 when 15 -to- 33 inches of snow fell in southern Wisconsin (the day Governor Walker gave his state of the state address at the Capitol), and the blizzard in February of 2008 in the southern region when many motorists got stranded on the Interstate overnight because plows couldn’t keep up with the snowfall.