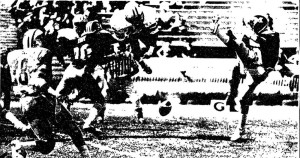 September 15, 1984. The Badgers were 1-0 as they went on the road for their game against the Missouri Tigers, who had lost their season opener against Illinois. For the first three quarters, it looked like Mizzou would hand the Badgers their first loss of the year. After outscoring Wisconsin 13-7 in the 1st half, the Tigers used a big 3rd quarter to stretch their lead to 28-7, with quarterback Warren Seitz throwing for 26 yards and three touchdowns. Bill Connelly, author of Study Hall: College Football, Its Stats and Its Stories, covers Missouri for SB Nation. He says Wisconsin wasted no time in mounting a miracle 4th quarter comeback.

Wisconsin cornerback Richard Johnson blocked a punt and recovered it in the end zone, cutting the lead to 28-14 on the very first play of the 4th quarter. Then Johnson blocked another punt, setting up the second Wisconsin touchdown of the quarter two minutes later. After another defensive stop, the Badgers marched 66 yards to even the score 28-28.

“It’s pretty much the ultimate domino effect, and it all started with a couple of bad punts,” said Connelly.

The final minutes included a missed field goal by Wisconsin, then a touchdown by the Badgers’ Vernon Boyd on their next possession, making it 35-28. Missouri had time to drive for a touchdown of its own, but failed on a two-point conversion, allowing the Badgers to eek out a 35-34 win.

The win pushed Wisconsin’s record to 2-0 on the year, and more importantly took its place as the biggest 4th quarter comeback in Badger history.