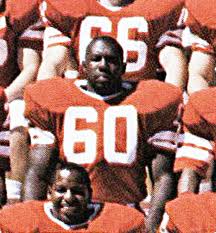 October 2, 1982. Badger fans had high expectations heading into the 1982 football season, hoping for the team’s first bowl victory. The start of the season began to dash those hopes. Wisconsin lost two of its first three games that season, and headed into Week 4 with a sense of urgency against Big Ten opponent Purdue. But the Boilermakers were experiencing a little urgency of their own, having lost their first three games as they welcomed the Badgers to West Lafayette.

If a bowl game was in the Badgers’ future, they needed a road win. Wisconsin defensive tackle Darryl Sims and his teammates knew it.

“We knew that it needed to start there, and then from that particular point we would just need to continue to win game after game after game to put ourselves in a position where we could maybe have some postseason play.”

The Badgers didn’t do it the easy way. They trailed 31-23 in the 4th quarter before scoring 12 unanswered points. The key play was a blocked punt and 32-yard return for a touchdown by linebacker Jim Melka.

Sims told Bill Scott he appreciates his role on that team, which served as a starting point of much success for Wisconsin football.

“People can always reflect back on it and say, ‘You guys were the team that kind of got things started,’ and that certainly is a nice jumping-off point to be associated with.”

The win turned around the season and put the Badgers on the road to their first-ever bowl victory in the Independence Bowl, a 14-3 win over Kansas State.