You are here: Home / News / Shining Moments in Badger History: The end of a two decade long losing streak 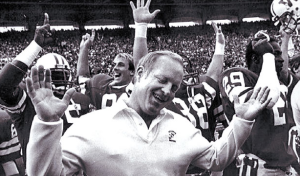 October 10, 1981. The Ohio State Buckeyes came into Camp Randall looking for a 22nd straight victory against the Badgers. Wisconsin hadn’t beaten the Buckeyes since 1959, but Coach Dave McClain had been gaining ground in building Wisconsin’s confidence. Both teams came into the game with a 3-0 record on the season.  With a victory against Michigan under their belt, the Badgers knew this was their chance to be taken seriously in the Big Ten.

After a fumbled punt and three botched snaps the Buckeyes were down 17-14 at halftime.  Wisconsin didn’t let up, controlling most of the second half as well. Ohio State allowed five turnovers, including three interceptions.  The Badgers came away with a 24-21 victory breaking the two decade old losing streak.

“Shell shocked. You just sat back and said we just beat Michigan and Ohio State. I couldn’t believe what happened.”

Wisconsin ended the season with a 7-5 record. They played Tennessee in the Garden State Bowl. Players Al Toon and Tim Krumrie went on to play in the NFL.