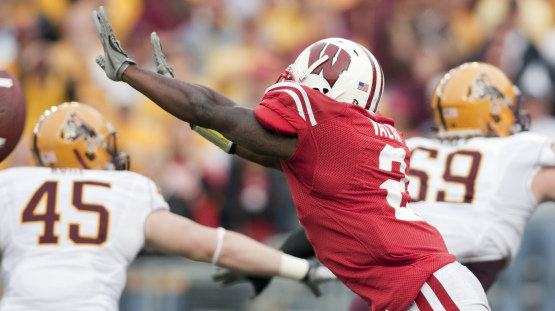 September 18, 2010.  In a showdown between the Pac10 and the Big10 Conferences, the unranked Arizona State Sun Devils walked into Camp Randall with big hopes for an upset.  The Badgers were ranked 11th in the country but both teams were sporting a 2-0 record for the 2010 season.

ASU had looked very good in their wins over FCS foes Portland State and Northern Arizona.  The Sun Devil offense was averaging over 325 yards a game.  This included a potent aerial attack led by Michigan transfer Steven Threet.

Wisconsin was not ranked 11th for nothing.  Running back John Clay had broken the 100 yard mark in 8 consecutive games and had 260 yards and four touchdowns in the first two games of the season.  The offensive line had allowed only two sacks in the young season and then there is the mystique of Camp Randall.  The Sun Devils were coming to play where the Badgers hadn’t lost to an unranked opponent in 25 games.

The crowd of over 81,000 was treated to a game of great highs and lows.  At times, the Badgers looked like they had been sucker punched.  Special teams gave up 261 kick-return yards (including a 97-yarder and 95-yarder) to ASU.  But, the defense would step up and prevent the Sun Devils from capitalizing on most of their opportunities.  In fact, ASU had more yardage in returns than their rushing or passing total in the game.  The Badger running game had nearly 200 yards and Clay had officially reached his 9thconsecutive 100 yard game early in the 4th.

Late in the 4th, Wisconsin led 20 to 13.  Then the Sun Devils struck with a drive capped by a two yard run by Cameron Marshall.  The Wisconsin faithful were ready for a tie when Badger defensive back Jay Valai surged through the line and blocked the would-be game tying extra point.  The Badgers would then run out the clock and ASU’s hopes of an upset were dashed.  Final score 20 – 19, Badgers.

Valai’s blocked kick kept the Camp Randall streak alive but, more importantly, it was a shining example of never giving up and playing your best on each and every down.