You are here: Home / Packers / Sitton misses practice with bad back (AUDIO) 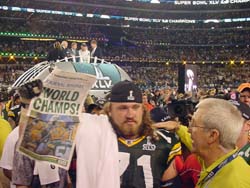 that he first experienced on the flight to San Francisco last Saturday.  Those issues continued during Sunday’s season opening loss to the 49ers in San Francisco.

Sitton said he was feeling a lot better on Wednesday, saying it’s a recurrence of back problems he has had during his career.

When asked if Sitton would play Sunday against Washington, Sitton said he’ll have a better idea by Friday.

Sitton played every offensive snap and wound up with three penalties, one of his poorer performances since he entered the NFL.

AUDIO: Josh Sitton asked if the refs have it out for him :19

AUDIO: Sitton said back issues are a hazard of the job :09

If Sitton can’t play on Sunday, it’s expected that Don Barclay would move to left guard and Marshall Newhouse would take over at right tackle.