You are here: Home / Sports / Stricker tees off today at BMW Championship 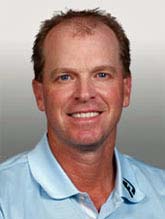 ranked 8th in the FedEx Cup playoff point standings.  Stricker skipped the first week of the playoffs, then took second at the Deutsche Bank Championship.

Stricker’s initial plan was to play this weekend and then skip the Tour Championship, opting instead for an elk hunting trip out west.  But he’s since cancelled that trip and plans to play next week.

The BMW Championship features the top 70 golfers in the playoff points race.  Following this weekend, the field will be narrowed to the top 30 players for next week’s Tour Championship with the $10-million top prize on the line.

Rory McIlroy is the defending champion at the BMW Championship.