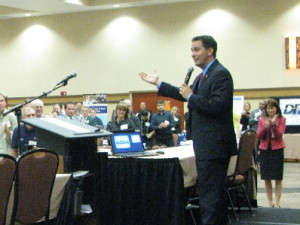 The 3rd Annual Governor’s Small Business Summit was in Stevens Point Wednesday, and Governor Scott Walker outlined where the state has been and where it’s going.

Walker says figures released Tuesday by the Federal Reserve Bank of Philadelphia show Wisconsin jumping to number two in the nation for economic growth projections, but he is hopeful the pace of Wisconsin’s recovery and job growth picks up. “We look at it as an indicator saying we had steady job growth, but we’d like to see a faster pace than we did the first two years. The 62,000 jobs were for the first two years, 2011 and 2012. They don’t reflect at all 2013 yet, and so we think that pace is going to pick up dramatically.”

The Governor has been criticized for being behind on his campaign goal of creating 250,000 new jobs in his first term. Another goal has been reached, and Walker is optimistic this will help create more of those jobs. “We’ve now seen a net increase of more than eleven thousand new employers over the last two to two-and-a-half years.” Walker told the attendees during his presentation, “When I set out that big, bold, ambitious number for jobs, I also talked about another pledge at the same time that doesn’t get quite as much attention. I said back then I’d like to help the people of this state create 10,000 or more new businesses in the state. Now this is a net number, not a gross number, and we’ve already hit that.”

Walker told attendees it’s important to keep creating more jobs. “It’s why we have that big, bold, goal of 250,000 jobs. People ask ‘where did that come from?’ It came from that number up there (on his slide presentation). We saw more than 133,000 jobs lost, and when you lose jobs, whether it’s here or anywhere else around the state or around the country, those aren’t jobs…those are people. Those are real people.”

Walker explained that he had some opposition last winter when he proposed changes to the Unemployment Insurance rules, such as increasing the requirement to go out looking for work. “This isn’t about adding a burden, this is about making it easier to find a job, which is what most people should want in the State of Wisconsin. You know, true freedom and prosperity doesn’t come from the mighty hand of the government. It comes in the dignity that only comes from work, and the best way to empower people to have better lives and better outcomes for themselves and their families is to help get them back up on their feet again and get them in the workforce, and we want to help do that.”