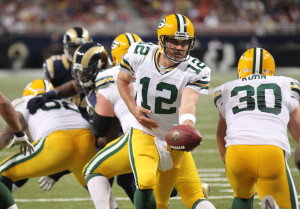 The Packers are trying to win their 3rd straight NFC North Division title.  They’ll also be trying to avenge a pair of losses to the 49ers last season, including one in the playoffs last January.

Can the Packers protect quarterback Aaron Rodgers.  Last season, Rodgers was sacked 51 times, which led the league.  The Packers tried to shuffle their offensive line around during the offseason.  That project didn’t even get off the ground when left tackle Bryan Bulaga went down with a season ending knee injury.

If the Packers can improve their protection, they’ll have a chance to hit the 49ers for some big plays.  San Francisco lost safety Dashon Goldson, a two-time Pro Bowler to free agency.  Nickel back Chris Culliver also blew out a knee on August 1st.  He had developed into one of the NFL’s top No. 3 corners.

The 49ers are also starting the season without wide receivers Michael Crabtree (torn Achilles) and Mario Manningham (knee), their No. 1 and No. 3 wide receivers.

The Packers gave up big plays in last year’s playoff game against the 49ers.  QB Colin Kaepernick rushed for a playoff record 181 yards.  The Packers have had all offseason to defense the read option.  We’ll see Sunday if they can put the brakes on Kaepernick.

It should be a great game Sunday.  I have more thoughts on the game in today’s WRN Sports Daily video.