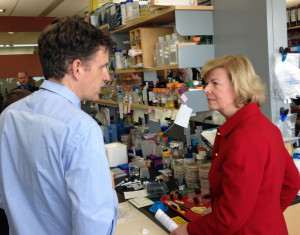 Wisconsin Senator Tammy Baldwin believes congress has learned its lesson on government shutdowns. “There’s no question in my mind that this had a very negative impact, and the public is rightly speaking out and calling for our bipartisanship and cooperation,” said the Madison Democrat, who’s been named to the House-Senate conference committee charged with hammering out a budget deal by December 13th.

The panel was formed as part of the deal that ended the costly partial government shutdown – something Baldwin doubts will happen again. “I think it would be very unlikely that we would have another shutdown,” she said Tuesday on the University of Wisconsin campus in Madison. Wisconsin’s other U.S. Senator, Republican Ron Johnson, also wants to avoid another shutdown, but he said the two parties cannot agree on the size of the problem they face. Johnson is also on the conference committee, which is co-chaired by a third member of Wisconsin’s congressional delegation, GOP House Budget Committee chairman Pail Ryan of Janesville.

While there’s been some talk of a “grand bargain” to tackle spending and entitlement reform, Baldwin thinks the conference committee should limit itself to reconciling the budgets already passed by the Senate and House. “That’s a daunting task in and of itself,” she said. Still, she believes a compromise can be reached. “I think what probably at this point is the difference between the Senate approach and the House approach is that I believe – and a number of my colleagues believe – that we can do this without cutting benefits.”

Baldwin toured Professor Cameron Currie’s laboratory in the UW Microbial Sciences building on Tuesday, and later participated in a round table discussion with faculty members about the threat to research funding as a result of the sequester. She said she’s hoping the conference committee will be able to end governing from crisis to crisis. “I think there’s a recognition that applied science creates ideas and innovations that ultimately spur our economy,” she said.