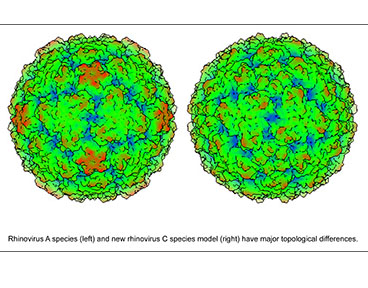 At the University of Wisconsin, a breakthrough on the common cold front. Researchers construct a model of rhinovirus C and show how it differs from rhinoviruses A and B. “We previously assumed all rhinoviruses would be the same as each other, and it turns out that they’re not,” said biochemistry professor Ann Palmenberg. That discovery goes a long way towards explaining why drug trials targeting rhinoviruses haven’t been very successful. “We now understand why the rhinovirus C is different than the A and B, and why the previous drug trials did’t work.”

The new model may soon lead to the receptor for rhinovirus C, which would be an obvious target for new drug therapy. “Probably 85 percent of the common cold are due to those three species of virus.” said Palmenberg. Rhinovirus C, which was discovered just seven years ago, tends to cause severe colds, deep in the lungs. That can be especially bad for kids.