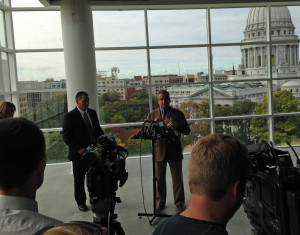 The Menominee Nation is willing to increase payments to the state to offset losses from other tribal casinos, but the tribe’s chairman says the Forest County Potowatomi are not backing off on opposition to a proposed Menominee casino in Kenosha.

Menominee Nation Chairman Craig Corn still thinks the opposition by the Potowotami and the Ho Chunk Nation can be overcome. “We believe that we can offset any negative impact that any of those tribes may have,” Corn said Wednesday. He and Hard Rock International Chairman Jim Allen met with Governor Scott Walker and presented the final proposal for the casino they want to build at the shuttered Dairyland Greyhound Park.

Corn said the Menominee propose increasing payments to the state in a formula designed to make good the competing tribes losses in their casinos. “You’re going to be covered,” he said. “Your members are still going to get their $12,000 dollar a year per cap. They’re still going to get their $78,000 a year per cap (per capita payments to tribal members from casino profits). All the negative effects would be addressed.”

Corn said he sent out letters to the Potowatomi and the Ho Chunk on Monday, asking them for a meeting to present the Menominee offer. He said the Potowotami responded by e-mail that they “were no interested in talking,” and that he has not heard back from the Ho Chunk.

The Oneida Tribe has agreed not to stand in the way of the proposed Menominee casino. “The agreement with the Oneida is a great example of how the governor bringing the tribes together, sitting down and have honest dialog, proved to be successful,” Hard Rock’s Allen said. Details of the agreement remain confidential.