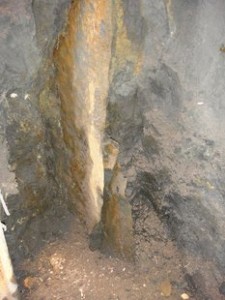 An investigation into Green Bay’s sagging Leo Frigo Bridge has found that the foundation of the support pier that sank was corroded by water. State Department of Transportation project manager Tom Buchholz told reporters today that corrosion was also found in test pits for three nearby support piers, although Pier 22 is the only one that has shown any signs of sinking.

The pier sank two feet on the morning of September 25th, causing the deck of the bridge to drop as well. The bridge, which carries a section of Interstate 43 through the Green Bay area, has been closed since then and is expected to remain that way indefinitely. About 40,000 vehicles used the bridge each day.

The DOT’s inspection has revealed that pilings located eight feet below the bottom of the concrete footing had buckled, apparently due to corrosion. The experts on the investigation team believe this corrosion was caused by a combination of the soil composition at the location and the rise and fall of the water table.

There has been no more movement on the bridge since last week and the department does not believe there is any danger of it collapsing. The DOT has not yet determined how it will go about fixing the bridge. WisDOT NE Region Director Will Dorsey says their goal is to do “whatever is needed to quickly and safely reopen the bridge.”