While the offense was struggling to score touchdowns, the Green Bay Packers turned 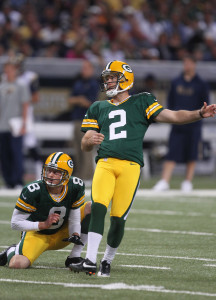 to their kicker, Mason Crosby to help win a game.  Crosby did just that, going 5 for 5 in field goal opportunities and finishing with 16 points in the Packers 22-9 win over the Detroit Lions on Sunday at Lambeau Field.

Crosby hit from 52, 44, 42, 31 and 26 yards and added an extra point.  He’s now 9 for 9 on the season and clearly has his confidence back.  Remember it was Crosby that was close to losing his job last season and then again in training camp, but he’s put all of that behind him.  Crosby is once again performing at a level that could be compared to his 2011 season when he made his first 16 field goal attempts.

It was the first time in his career that Crosby hit five field goals in a single game.

AUDIO: Crosby said his recent struggles are behind him :19

The Packers only touchdown came in the 3rd quarter when Aaron Rodgers called an audible and found James Jones for 83-yards down the left sideline.

AUDIO: Aaron Rodgers on his TD pass to James Jones :19

Rodgers finished 20 of 30 for 274 yards, 1 touchdown and no interceptions.

Eddie Lacy finished with 99-yards rushing, one shy of a 3rd straight 100-yard rushing game for the Packers offense.  The Packers did finish with 180 yards on 33 carries as a team.

Detroit played without their sensational wide receiver Calvin Johnson (knee) and that meant the Lions had very few weapons to go to offensively.  The Packers then did a good job of bottling up Reggie Bush, who finished with 44 rushing and 25 passing yards.