You are here: Home / Packers / Crosby is NFC Special Teams Player of the Week 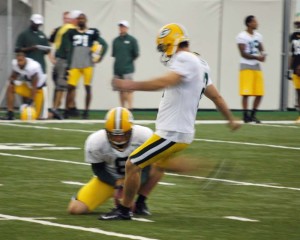 Crosby scored 16 points, converting all five field-goal attempts and one PAT, in the Packers’ 22-9 win over the Detroit Lions.

Crosby tied a single-game franchise record with five field goals (26, 52, 31, 42 and 45 yards).  He has converted all nine field-goal attempts this season and has made 13 consecutive regular-season field goals dating back to 2012.  He leads the NFC with the most field goals made (nine) without a miss.

Crosby is in his 7th season out of Colorado.  This is his fifth career Player of the Week Award.  That ties him with Ryan Longwell for the most in franchise history.

AUDIO: Mason Crosby is thrilled with the Special Teams Player of the Week honor :13