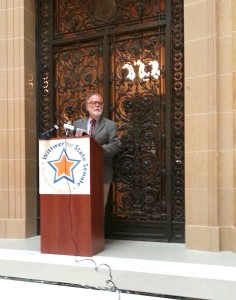 Ernie Wittwer announces his candidacy as a Democrat for the seat currently being held by Republican Senator Dale Schultz (R-Richland Center). Witter makes his announcement just outside the Senate chambers. “I’ve lived in Wisconsin all of my life but Wisconsin’s on the wrong track. Our politicians seem more interested in partisan agendas than in solving problems and serving people.” Repeating a line heard several times in his prepared statement, Wittwer says, “I’m running because you deserve better.”

Now that a Democrat has announced his candidacy, and a Republican has already stated his intentions to run, Schultz — who is a moderate Republican — will need to decide whether he’ll try to defend his Senate seat — and whether he’ll do it as a Republican or an independent. Schultz’s campaign spokesman Todd Allbaugh says the Republican party is out of sync with the voters in southwestern Wisconsin. “That’s why he’s broke with his party. He is fiercely independent; he represents the independent nature of the 17th Senate District. He is not running as a Democrat, if he decides to run, but everything else is on the table.”

Representative Howard Marklein (R-Spring Green) is a conservative Republican who is also campaigning for Schultz’s senate seat. Allbaugh calls him a “Tea party right wing candidate who is bought and paid for by Americans for prosperity.”

Schultz will make an announcement about a possible re-election campaign after the new year.

Beau Stafford, director of the State Senate Democratic Committee, said Schultz wouldn’t win a Republican primary and certainly not as an independent. Allbaugh disagrees, saying Schultz has never been more popular in his district. He says Democrats and independents are “begging” Schultz to run again. “We get at least a couple of phone calls or emails a day asking him to run for governor, let alone state Senate, and those come from, a lot of times, Democrats.”

AUDIO: Allbaugh says Schultz has never been more popular in his district. :27

Wittwer has worked over 24 years at the state transportation agency, managing the agency’s staff and working as its budget director.

Schultz has spent three decades in the Legislature, 22 of those years in the state Senate. He angered fellow Republicans when he voted against his party a couple of times — on a bill to streamline mining regulation and legislation limiting collective bargaining for public workers. In a statement, Schultz said he’s “proud to represent one of the most independent minded senate districts in Wisconsin.”