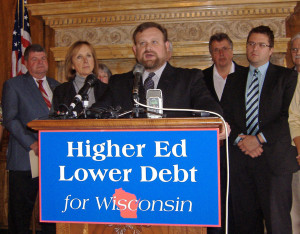 With a study released earlier this year showing that the average debt per college graduate is nearly $25,000 in Wisconsin, a group of legislators are proposing a Wisconsin solution to the student loan debt crisis.

At a press conference to announce their “Higher Ed, Lower Debt” proposal Representative Corey Mason (D-Racine) noted that it’s almost impossible for holders of student loans them to refinance and take advantage of lower interest rates. “It’s not like having a mortgage, where if interest rates change, you can shop around at banks and credit unions and get the best possible deal,” Mason said. “Student loans don’t work that way.”

The average four-year graduate reported student loan payments of $350 a month which is paid back over a period of 18.7 years, according to the study from One Wisconsin Now. “This an issue that impacts people well into their 20s, 30s, 40s, even in their 50s,” said Mason. “We talk to some people who pose the question ‘will I be able to pay off my own student loans before my own kids start college?'”

Senator Dave Hansen (D-Green Bay) asked Republicans to support their proposal. “We can find a hundred million dollars for a tax cut,” he said, referring to the rapid legislative action on Governor Scott Walker’s property tax cut. “If there ever was an attempt to have bipartisan support, this should be it.” Hansen delivered the Democratic Weekly Radio Address on the proposal.

The legislation from Mason and Hansen:

“This is a real crisis that people are dealing with, and we know legislators here about it, so we’re optimistic that this is a proposal that will be seriously considered by our colleagues on the other side of the aisle,” Mason said.