You are here: Home / News / Heavy rain does little to end drought 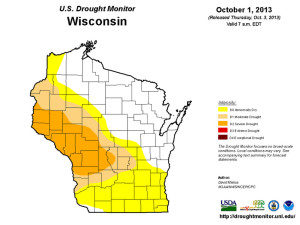 Despite some heavy rains last weekend, Wisconsin’s drought conditions barely changed during the past week.

The latest US Drought Monitor update shows almost 60 percent of the state’s land area is abnormally dry or worse, and about 17 percent of the Badger State remains in a severe drought. Both numbers are about the same as a week ago.

The area experiencing a severe drought follows along the Mississippi River from Vernon-to-Polk counties, eastward along a line from Eau Claire and Neillsville to Adams-Friendship. Parts of the state that are drought-free remain roughly southeast of a line from Superior to Sheboygan.

Meanwhile, the state’s driest areas could get up to three inches of rain by the end of tomorrow. The National Weather Service says a warm front is expected to push thunderstorms into the Badger State later today. Several waves of showers-and-storms are expected as a low pressure system intensifies to the west. Severe weather is also possible Friday afternoon and into the evening.

Rain is a possibility every day through Sunday. Cooler temperatures are predicted through the weekend, with highs in the 50s each day.