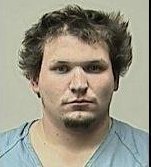 A Janesville faces two counts of battery with a hate crime enhancer after allegedly assaulting two men he thought were speaking Spanish. They were actually speaking Hebrew. According to Madison Police, the two victims, who are both in their early 20s, were walking in downtown Madison early on Saturday morning. The pair was speaking Hebrew when 23-year-old Dylan T. Grall passed them on the street.

Grall allegedly swore at the two men and demanded they speak English, before attacking them. One man fall to the ground, the other had an eye that was nearly swollen shut. Grall denied hitting the two men, but did admit telling them to speak English, although he thought they were speaking Spanish.