You are here: Home / News / Kind: lawmakers pressured not to compromise 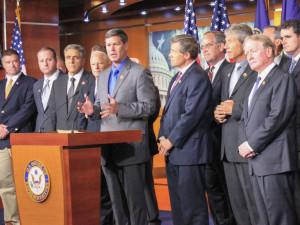 U.S. Rep. Ron Kind (D-WI) joins fellow members of Congress in calling for an end to the government shutdown.

U.S. Representative Ron Kind (D-La Crosse) urges his colleagues to get the federal government running again. Kind says the problem is that both Democrats and Republicans have been under tremendous pressure from their leadership and outside groups not to accept any kind of compromise with the other party. He says both sides believe they have the upper hand. “Folks, we have a broken government that needs to be fixed. The only way it’s going to be fixed is through bipartisan cooperation.”

Kind lists three priorities — get the government functioning again, pay the bills, and immediately begin bipartisan discussions for a longterm deficit reduction agreement to get the fiscal house in order. Kind has initiated discussions with some Democrats and GOP colleagues about finding a solution to the shutdown and the dysfunction coming out of Washington.

“I’m just afraid that both sides — the leadership on both sides — are so dug in waiting for the other to completely capitulate that there’s not much room for a bipartisan compromise in order to get this done. And folks back home don’t care.”

The American people expect a higher level of duty from their elected representatives in Washington, Kind says, to make sure that the U.S. government keeps its doors open. He wants to end the “dysfunction” and “hyper-partisanship” that has paralyzed Washington, saying he’s “tired” of it.

A group of Democrats and Republicans are in discussions, “trying to break that mold.” Kind says “there appears to be momentum building on both sides.”

AUDIO: Kind says the problem is that both Democrats and Republicans have been under tremendous pressure from their leadership and outside groups not to accept any kind of compromise with the other party. :55

Kind had voted against the continuing resolution aimed at shutting down government and derailing health care reform.