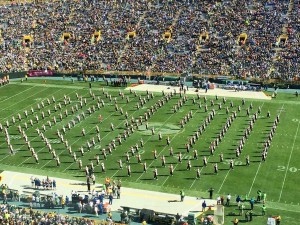 verbally abused members of the Wisconsin Marching Band on Sunday at Lambeau Field.

In a statement released by the team, the Lions said, “We are aware of the reports involving Dominic Raiola and the University of Wisconsin Marching Band.  Those reports are extremely inconsistent with the standard of behavior we expect from our players and from every member of our organization.  We currently are gathering more information and will respond further when appropriate.”

The Milwaukee Journal Sentinel reported today that according to various Facebook and blog reports, Raiola was verbally abusive to members of the band while the Lions warmed up on the field before the game.

Bandmember Zach York, wrote on his Facebook page Sunday night, “Dominic Raiola is literally the worst person I have ever had the fortune to encounter.  After marching down the field awaiting the national anthem, he went off on a verbal tirade, among other things, questioning my sexuality (as a band member) and then continued on to bring my sister and my recently deceased mother into the conversation.”

Dominic Raiola is the brother of Donovan Raiola, who played football at Wisconsin.