You are here: Home / Packers / McMillian hit with fine

Green Bay Packers safety Jerron McMillian said he was fined $15,000 by the NFL for 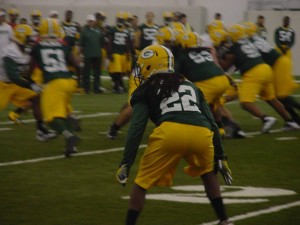 a hit that he put on Detroit tight end Tony Scheffler last sunday.  The hit drew an unnecessary roughness penalty.  McMillian said he will definitely appeal the league fine.

The Packers ruled linebacker Brad Jones out of this Sunday’s game at Baltimore after he suffered a hamstring injury in the Lions game.

Mike McCarthy said he had no reason to believe that Jones would be out very long.

With Jones out, Jamari Lattimore is expected to get the start in his place at inside linebacker.

AUDIO: Jamari Lattimore on taking over :13