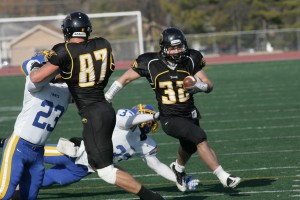 Conference battle at Titan Stadium in Oshkosh on Saturday afternoon.

5th ranked UW-Whitewater faces 9th ranked and defending league champion UW-Oshkosh.  Prior to Oshkosh winning the title last year, the Warhawks had captured the previous 7 titles.  Both teams are 6-0, including 3-0 records in league play.

This is the 105th meeting between the two schools.