You are here: Home / Business / Push and pull on Kenosha casino 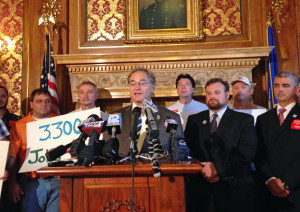 Another day, another push urging Governor Scott Walker to approve the Menominee tribe’s proposed Hard Rock casino in Kenosha. “Thanks to the Menominee putting forward an offer that would share revenue, we have a pathway to get to a win-win, so that all of Wisconsin can benefit,” Assembly Minority Leader Peter Barca (D-Kenosha) said during a Capitol press conference with local elected officials and representatives of the building trades, promoting the estimated 3500 jobs the Menominee project could generate.

Milwaukee mayor Tom Barrett and other elected officials in the Milwaukee area oppose the Menominee casino, which is seen as a threat to revenues at the Potawatomi tribe’s lucrative casino there. “I talked to Mayor Barrett and I told him “let’s find a win-win here.”” said Barca.

“We are asking Governor Scott Walker to reject the casino proposal because we believe strongly in keeping those jobs here in Milwaukee,” said Milwaukee Common Council President Willie Hines in a statement. “It is estimated that Milwaukee will lose as many as 3,000 direct and indirect jobs if the Kenosha casino scheme is approved. Many of those jobs belong to citizens who live in parts of our city that have been hit hardest by unemployment and housing foreclosures.”

State Representative Samantha Kerkman (R-Powers Lake) cited a study by the Illinois legislature. “There’s two to four billion dollars of untapped gaming revenue that is left on the table” she said. “I want to bring that money to Wisconsin, I don’t want it to go to Illinois.”

The governor has insisted on by-in by all eleven tribes for any new casino – and the Forest County Potawatomi and Ho-Chunk Nation remain strongly opposed to the Menominee plan. “It’s his decision if he’s going to do this or not, so we would urge him to weigh the full impact, not just on the Potatatomi but on the entire state of Wisconsin, particularly the southeast Wisconsin region,” said Representative Cory Mason (D-Racine).