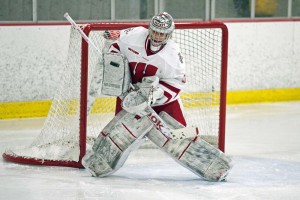 of the Week by the WCHA.

The second team All-American honoree last season, began her senior campaign with over 100 straight consecutive minutes of scoreless hockey against visiting WCHA-Rival Minnesota State last weekend.  She made 25 saves in a 3-0 shutout victory in the opening game last Friday.

In Saturday’s series finale against the Mavericks, she registered 28 stops, including 15 in the final period as the Badgers earned a 5-1 win.  In all, she stopped 53 of 54 shots for a series save percentage of .981, which is the nation’s best mark among goalies with at least two starts this year.

The senior from Delafield,  now has amassed 85 career victories in net for the Badgers and needs seven wins to pass Jessie Vetter for the top spot in school history.

This marks the ninth time Rigsby has been named the WCHA Defensive Player of the Week during her career.