You are here: Home / News / Sagging Green Bay bridge could reopen by January 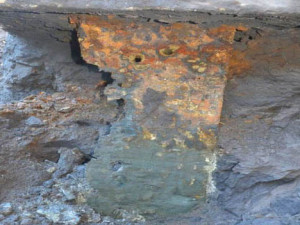 Corrosion on a support pier for the Leo Frigo Bridge. (Photo: WisDOT)

The sagging Leo Frigo Memorial Bridge in Green Bay could be fully propped up and re-opened by January.

State Transportation Secretary Mark Gottlieb says that the DOT is now seeking bids from contractors, which will demand a completion date of January 17th for the project. The winning bidders would also be rewarded for finishing early, and penalized for being late. The DOT expects the repair work to begin on November fourth.

The bridge carrying Interstate 43 over the Fox River has been closed for almost a month. One of 51 support piers sank two-feet, causing a sag in the high rise bridge. An investigation discovered four piers were corroded. The work will focus on reinforcing them by installing deeper structural shafts that touch bedrock.